The Harmonium is a popular instrument for kirtan singing. However, the Sikh Gurus, early Gursikhs and Baba Banda Singh Bahadur never saw a Harmonium. In fact, Maharaja Ranjit Singh never saw, or used, or even heard a Harmonium. The Harmonium was invented in Europe in Paris in 1840 by Alexandre Debain, though there was concurrent development of similar instruments elsewhere.

During the mid-19th century, Christian missionaries brought French-made hand-pumped harmoniums to India. The instrument quickly became popular there: it was portable, reliable, easy to learn and had a low price. It has remained popular to the present day, and the harmonium remains an important instrument in many genres of Indian music. For example, it is a staple of vocal North Indian classical music concerts. It is commonly found in Indian homes. Though derived from the designs developed in France, the harmonium was developed further in India in unique ways, such as the addition of drone stops and a scale-changing mechanism. 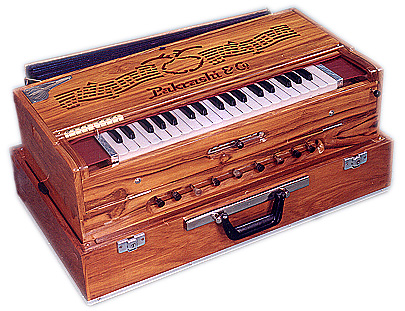 The harmonium was widely accepted in Indian music, particularly Parsi and Marathi stage music, in the late 19th century. By the early 20th century, however, in the context of nationalist movements that sought to depict India as utterly separate from the West, the harmonium was portrayed as an unwanted foreigner.

Technical concerns with the harmonium included its inability to produce meend (slides between notes) and the fact that, once tuned, it cannot be adjusted in the course of performance. The former prevents it from articulating the subtle inflections (such as andolan, gentle oscillation) so crucial to many ragas; the latter prevents it from articulating the subtle differences in intonational color between a given svara in two different ragas.

The Harmonium is a small, manually-pumped musical instrument using fixed reeds to create the basic sounds. There are two main types of harmonium: a foot-pumped version that resembles a small organ, and a hand-pumped portable version that can fold up for easy transport. The hand-pumped portable version is very popular with Kirtan Jathas along with the Tabla and these form the main type of instruments used by Ragis during the performance of Kirtan.

In Indian music, the Harmonium is considered to be one of the most versatile instruments. The harmonium is used in classical, semi-classical, and devotional music. It is usually used as an accompanying instrument for vocalists in classical music. However, some musicians have begun playing the harmonium as a solo instrument. One of the largest pioneers of this style is Pandit Tulsidas Borkar of Mumbai. More and more music students are learning in this fashion.

Harmoniums consist of banks of reeds (metal bands which vibrate when air flows over them), a pumping apparatus, stops for drones, and the keyboard. The harmonium functions mostly like an accordion. In order to play the instrument, one must pump air into the instrument and press the desired keys. The sound of the harmonium is unique, and improves over time as the instrument ages. 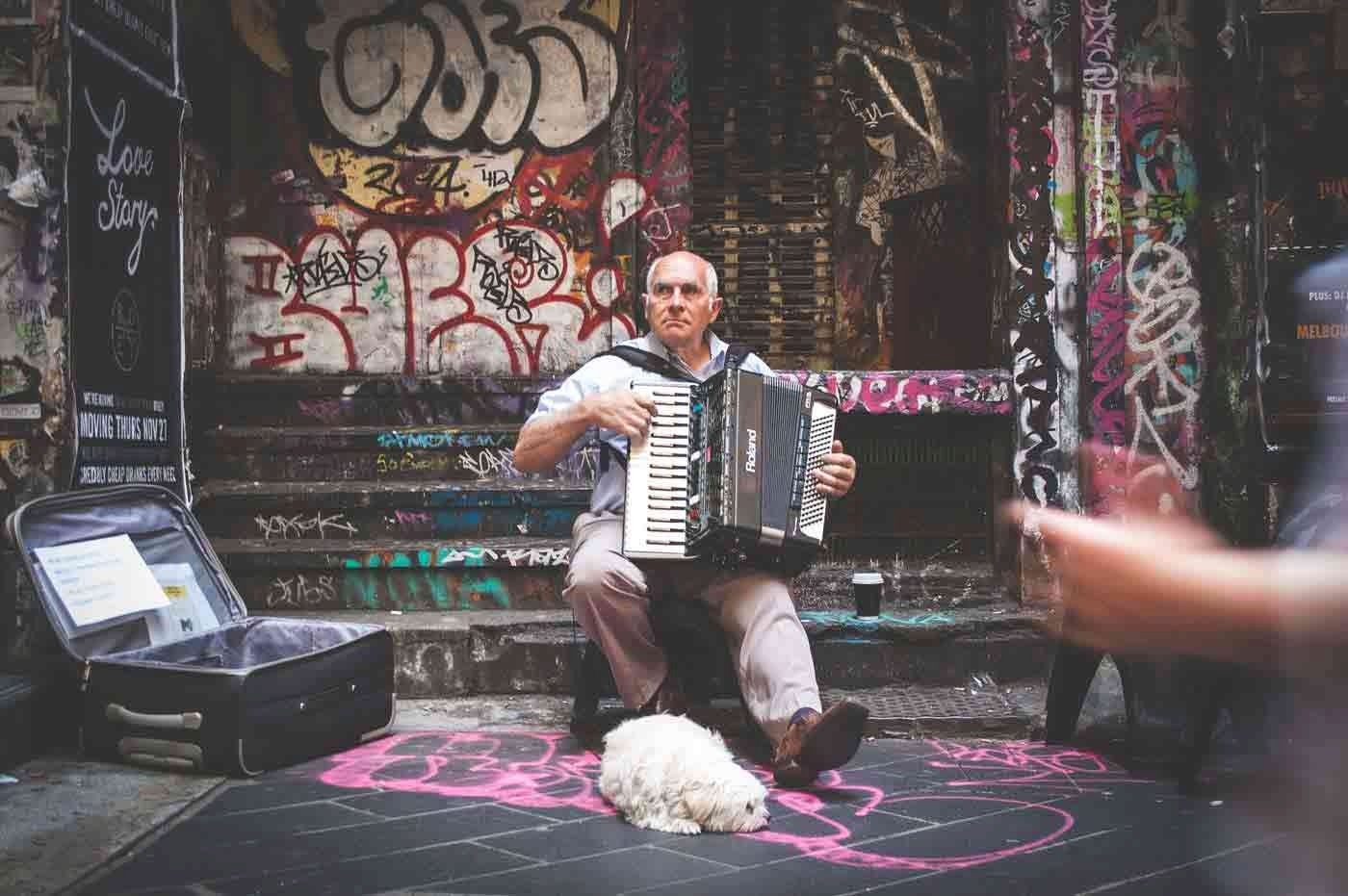 The Harmonium was developed from the Accordion. In western countries the Accordion is used to beg on the streets.

The twelve notes of the harmonium are not natural notes but are a tempered scale. In the saptak, the difference between S and R and again between R and G and so on has been(figures) to consistent and equal degree. The main defect of this instrument is that it has twelve artificial notes though they correspond to the twelve natural notes (as for instance on a sitar). With the accompaniment of harmonium-notes, the svaras of vocal music also tend to be artificial.

By playing the harmonium, the human voice becomes artificial, because according to the tradition of Indian classical music, the real notes of 22 shruties should be produced. There are certain notes in classical music which cannot be reproduced by the harmonium, for example _G_ in raga tod, M in raga Lalit, etc. Therefore, practice of svaras on the harmonium tends to make the svaras unnatural or unreal. Many classical singers frown at the use of harmonium.

The Tabla is the most popular percussion instrument used in the classical and popular music of the northern regions of South Asia (Afghanistan, Bangladesh, Nepal, northern India, Pakistan).

The term tabla is an Arabic word which means 'drum'. The origins of the word tabla come from the arabic word 'tabl', and this attests to its status as a product resulting from the fusion of musical elements from indigenous Hindu and Central Asian Muslim cultures that began in the late 16th century. 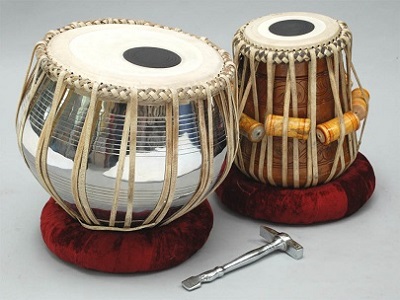 The history of this instrument is at times the subject of heated debate. Reliable historical evidence places the invention of this instrument in the 18th century. Another common historical narrative portrays the tabla as being thousands of years old, yet this is mere conjecture, based on slipshod interpretations of iconography.

The different traditions of tabla playing go back to the 18th century. The transformation of the tabla from a religious-folk instrument to a more sophisticated instrument of art-music occurred in the late 18th or early 19th centuries, when significant changes took place in the music of North India.

In public performances, tabla players were primarily accompanists to vocalists and instrumentalists; however, they developed a sophisticated solo repertoire that they performed in their own musical gatherings.

The two drums of the tabla are called the dayan and bayan, the names came from the words dayn and baya which mean right and left in hindi.

The smaller drum, played with the dominant hand, is called the dayan It is made from a conical piece of wood hollowed out to approximately half of its total depth. The larger drum, played with the other hand, is called bayan. It is a bowl shape made of metal (or sometimes clay or wood, although not favored for durability). It has a much deeper bass tone.

The playing technique for both drums involves extensive use of the fingers and palms in various configurations to create a wide variety of different sounds. On the bayan the heel of the hand is also used to apply pressure, or in a sliding motion, so that thepitch is changed during the note. This “modulating” effect on the bass drum and the wide range of sounds possible on the instrument as a whole are the main characteristics that make tabla unique among percussion instruments.

Both drum shells are covered with a head (or puri) constructed from goat or cow skin. This skin is bound together with a complex woven braid that also gives the entire assembly enough strength to be tensioned onto the shell. The completed head construction is fixed to the drum shell with a single continuous piece of cow or camel hide strap laced between the braid of the head assembly and another ring (made from the same strap material) placed on the bottom of the drum. The strap is tensioned to achieve the desired pitch of the drum. Additionally, cylindrical wood blocks are inserted between the strap and the shell allowing the tension to be adjusted by their vertical positioning. Fine tuning is achieved by striking vertically on the braided portion of the head using a small hammer.

The smaller drum, played with the dominant hand, is sometimes called dayan (literally "right"), dāhina, siddha or chattū, but is correctly called the "tabla." It is made from a conical piece of mostly teak and rosewood hollowed out to approximately half of its total depth. The drum is tuned to a specific note, usually either the tonic, dominant or subdominant of the soloist's key and thus complements the melody. The tuning range is limited although different dāyāñs are produced in different sizes, each with a different range. Cylindrical wood blocks, known as ghatta, are inserted between the strap and the shell allowing tension to be adjusted by their vertical positioning. Fine tuning is achieved while striking vertically on the braided portion of the head using a small, heavy hammer.

The larger drum, played with the other hand, is called bāyāñ (literally "left") or sometimes dagga, duggī or dhāmā. The bāyāñ has a much deeper bass tone, much like its distant cousin, the kettle drum. The bāyāñ may be made of any of a number of materials. Brass is the most common, copper is more expensive, but generally held to be the best, while aluminum and steel are often found in inexpensive models. Sometimes wood is used, especially in old bāyāñs from the Punjab. Clay is also used, although not favored for durability; these are generally found in the North-East region of Bengal.

The name of the head areas are:

Both drum shells are covered with a head (puri) constructed from goat or cow skin. An outer ring of skin (keenar) is overlaid on the main skin and serves to suppress some of the natural overtones. These two skins are bound together with a complex woven braid that gives the assembly enough strength to be tensioned on the shell. The head is affixed to the drum shell with a single cow or camel hide strap laced between the braid of the head assembly and another ring (made from the same strap material) placed on the bottom of the drum.

The head of each drum has a central area of "tuning paste" called the syahi (lit. "ink"; a.k.a. shāī or gāb). This is constructed using multiple layers of a paste made from starch (rice or wheat) mixed with a black powder of various origins. The precise construction and shaping of this area is responsible for modification of the drum's natural overtones, resulting in the clarity of pitch (see inharmonicity) and variety of tonal possibilities unique to this instrument which has a bell-like sound. The skill required for the proper construction of this area is highly refined and is the main differentiating factor in the quality of a particular instrument.

For stability while playing, each drum is positioned on a toroidal bundle called chutta or guddi, consisting of plant fiber or another malleable material wrapped in cloth.

Some basic strokes with dayan on right side and bayan on left side are:

Some talas, for example Dhamaar, Ek, Jhoomra and Chau talas, lend themselves better to slow and medium tempos. Others flourish at faster speeds, like Jhap or Rupak talas. Trital or Teental is one of the most popular, since it is as aesthetic at slower tempos as it is at faster speeds. 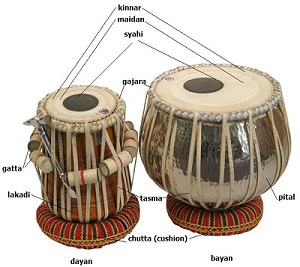 There are many taals, some of the more popular ones are: