Birth Of A Guru

Guru Nanak was born at Talwandi, in the present district of Shekhupura (Pakistan). Talwandi is now called Nankana Sahib and is about 20 kilometers from Lahore.

It was then a small village situated in the midst of a dense forest and waste-land, away from seats of power and tyranny.

Rai Bhoe, a Rajput of Bhatti clan and retainer of the ruler of Delhi, had been its founder and proprietor. Rai Bhoe owned about a dozen villages around Talwandi. After his death, his son, Rai Bular, succeeded him. Both Rai Bular and his father were new converts to Islam. They had accepted the religion of the rulers under the effects of force or the influence of some other powerful persuasion. But, unlike most converts, they were neither fanatics nor bigots.

Rai Bhoe was a warrior and had made himself the master of a great tract of fertile land. People of both persuasions were treated by him equally. In consequence, he had come to be honoured by all. His son, Rai Bular, was of a quiet, religious temperament and loved the society of Sadhus and Faqirs. He had none of the fIre of hatred that was then raging in the breasts of the Indian followers of the Arabian Prophet.

This was, no doubt, partly due to his being out of touch with the outside Muhammadan world. Talwandi was away from the tumults and excitements, brutality and fanaticism of the outer world. But there was also a deeper source of his toleration for his fellow man. As a truly religious man and not a fanatic, Rai Bular was inspired with sympathy for the downtrodden persecuted race. We shall fInd how this human touch in his nature made him discern, long before many others did, the true light in the divine child who was born in his village.

The Guru's mother was Bibi Tripta and father was Mehta Kalu Ram but people called him simply Kalu Ji. He was a Khatri and his sub-caste was Bedi.

What was Kalu ji's profession? There were many more villages around his village. Rai Bular had appointed Mehta Kalu as a 'Patwari'. A Patwari is a person who keeps account of all the land and the money coming and being spent.

Mehta Kalu, besides keeping the account of the governor's money, was also keeping account of the lands and land revenue. So, he was also called a revenue officer. He was senior to the heads of all other villages.

A girl was born to Mehta Kalu in her mother's home at village of Chahal (now in Lahore district of Pakistan Punjab) in the year 1464, her name was Nanaki. She was loved by all and was known as Bibi Nanaki. She was a loving girl. Even in childhood she was very sensible and intelligent. At a young age, Bibi Nanaki would help her mother listening to her prayers to the Lord.

Legend says that, at the time of his birth, which had taken place at about 1 o'clock at night, when the full moon was shining in all its glory, there were visible supernatural signs.

On the day of the Guru's birth, Bibi Nanaki was at home with her father. When the child was born the nurse, named Daultan, came running to tell the news. She looked sad and frightened.

"What is the matter Daultan? Why are you so sad?" asked Mehta Kalu.

"O sir, I am not sad, I am pleased to tell you that you have got a very handsome son in your family" replied Daultan. 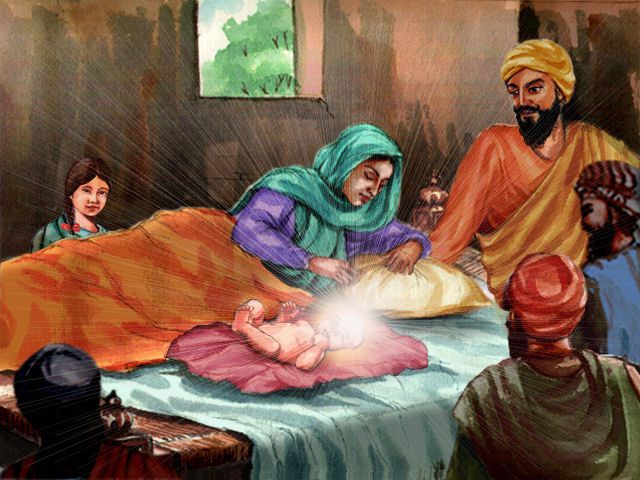 "What's that? Mehta Kalu in surprise. He looked upset too.

"Children cry when they are born, sir," said Daultan. "But this child did not cry. He simply smiled." "There must be something wrong with the child then," said the father. "What should I do ?"

"How should I know sir? I have never seen this happen before. But the most wonderful thing is the light," said Daultan, looking all the more surprised.

Daultan said, "I don't know whether it is good or bad sir, but I saw a dazzling light when the child was born. The light shone round his head like a star."

Mehta Kalu was worried, so he ran to fetch Pandit Hardyal. Hardyal was a Brahman. At once he came with Mehta Kalu to see the strange child. He asked Daultan many questions and also saw the child. He thought for a time and then said, "Mehta Kalu, you are very lucky to have this child. When he grows up, he will be a great man. He may be a king or a Guru."

"What is the matter Daultan? Why are you so sad?" asked Mehta Kalu. On hearing these words Bibi Nanaki was very pleased and she said, "I am sure, father, he won't be a king."

"Keep quiet Nanaki," said the father, "Don't you want to see your brother a king?"

"I would love to," said Nanaki. "But father, believe it or not, my dear little brother will never be a king. He will be a Guru. He will love everybody and give great ideas to the world. He will be a friend to all. People will remember him for a very long time. They will call him the Guru."

Mehta Kalu, Pandit Hardyal and Daultan were all amazed at Nanaki's words.

And so it happened, Bibi Nanaki's words came true.

The infant was named Nanak after his elder sister, Bebe Nanaki. How glad must she have been! Brothers named after them are especially dear to Punjabi sisters.

Nanak was Bibi Nanaki's own 'special' brother. Thus, apparently quite by accident, but probably by a divine pre-ordination, a lasting bond was established between the brother and the sister. He shared her name. We shall see that he came to own her very soul. She alone, of all his family, discerned, at a very early time, the Eternal Light that shone in her divine brother.

Baby Nanak never cried as other children do. His mother used to give him milk on time. But even if he was hungry at milk time, he would not cry. He would calmly remain laying down. Sometimes he looked up. Sometimes when he slept, his face looked very bright and his tender lips seemed to smile.

If his mother went away, he would remain calm in his cradle. Sometimes when sister Nanaki would hold and talk to him lovingly, he would look at her and his face would shine with delight.

The child grew up to be a very wise man. We still remember him. We still enjoy his great thoughts. This great man taught us to love everybody, black or white, rich or poor, man or woman.

Guru Nanak said, "God is one, and we are all his children. So we are brothers and sisters in one family. God is our father. He loves us only if we love one another. If we do not love one another, our father God, will not be pleased with us."

Back to Sakhis (Guru's stories)